You may remember my post on LA rockers Charlie Played Cello about two months ago, in which they featured as a new artist here on When We Were Beautiful. Well, I'm happy to reveal that in that short space of time, the band have been working hard and have now released a video for their track 'Memories Collide', which you can see below. I have been forewarned that if I am in any way a fan of 80's glam rock, I'm sure to enjoy the video. Well, as a huge Bon Jovi fan, how could I possibly pass up this opportunity?! You can see the results for yourselves, but let's just say it's nice for a band to have a little fun once in a while, especially a fairly new band, who don't feel they need to take themselves as seriously as everybody else. A great track with a rocking video.

Posted by Samborakid at 10:32 No comments: 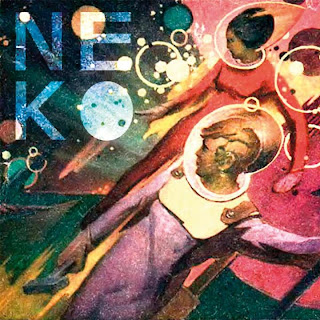 When We Were Beautiful would like to welcome Neko to its rostra of featured artists, a three-piece outfit from Worthing, UK intent on bringing guitars back into the charts. The pop-rock trio, founded earlier this year in its current formation, describe themselves as eclectic and hard-hitting, who are driven by otherworldy sounds among other things.

Otherworldy is certainly a great adjective to describe my introduction to the band, and indeed the introduction to their first track 'The Return'. A sweeping call-to-arms sounds loudly as a minor arpeggio rings out before the track settles into its stabbing chord progression. As the drums assure themselves and the listener, the vocals are introduced and remind me initially of a Matt Bellamy/Mika infusion strangely. Personal choices aside, the vocals are great and the track has a cool and simplistic feel as it progresses towards its first chorus, which is beckoned by a hint of lovely harmonies leading the listener in. The vocals do indeed start to soar here, picking up the rest of the band into a rousing and rather-epic chorus. The second chorus thankfully comes around a little quicker than the first, reassuring familiarity with the listener, before making way for a guitar-led section. The music drops as in the verses to allow for this, and although my first thought was to maintain the energy and texture of the choruses, the band's decision is justified by their rather abrupt ending. So unexpected was it in fact that I had to check if the track was over; there's room for another chorus but with a lengthy-period of time before the first chorus kicks in and a nod to the band's quest for chart domination, coming in at under three and a half minutes is a vote in their favour. A top tune.

'Changes' maintains the syncopated guitar riffs and the overall sound reminds me of The Hoosiers a little. Rhythm is clearly a factor in the guys' song-writing as they often seek to push the boundaries of livening sections up and ensuring, for instance, the drums mimic certain riffs to add a little more emphasis. As the chorus comes around, I'm reminded of a slightly McCartney-esque sound to the vocals and their harmonies adding an interesting Beatles-infusion into the mix. The guitar riff in the verses gets a little repetitive by the time the second verse is here which provides a good opportunity to add something new to help maintain the listener's interest whilst adding a deeper level to the song. 'Changes' ends as rather abruptly as its predecessor coming in at well under two minutes; there's of course room for extra sections but it's great the band have made the decision to keep things short and sweet. It's easy to elongate sections or throw too many ideas into the mix but harder to be brutal in deciding what stays and if this suits the band then who are we to judge?

Neko do as they promise, bringing a funky and fresh breed of guitar-pop to the table which would sit perfectly well in the popular music charts. Their friendly, feel-good charm and soaring choruses would not go amiss on National mainstream radio and I wish them every success in reaching that platform.

Neko are performing at Bar 42 this Saturday 4th August in Worthing, West Sussex with support from Seraphim, a recent feature on the blog. The guys have their on website which you can check out here and be sure to keep up with the guys by following them on Facebook.
Posted by Samborakid at 16:55 No comments: